One of my favorite chillout artists is back with a vengeance.  The tremendous Washington, DC trio Thunderball (Rob Myers, Steve Raskin and Sid Barcelona) has a new album dropping on November 9th and the Chillout Scene has the lowdown on “12 Mile High” for you.

I previously reviewed the title track “12 Mile High” and first single at The Couch Sessions.  It has an irresistable groove and the quick hitting horns and strings in the background that are common in Thunderball’s music are prevalent here.  It definitely is one of the highlights of the album and there are many, many more.

The first track “Enter the Brahmin” continues the mid-eastern/Indian feel of their other albums with a great sitar part.  It also continues the super spy movie imagery where our hero is working on a mission and just arrives to Mumbai to encounter a diabolical criminal posing as a Brahmin hellbent on taking over the world.  The slower, steady beat creates the feeling of tension in the cinematic story Thunderball is about to drop on us.

“Make Your Move” has a beautiful flowing intro with a flight attendant announcing the plane is about to take off then actually does take off into a wonderful funk-styled groove.  I really enjoyed the numerous tempo changes on this one as well as the soulful vocals of Mustafa Akbar.

“Low Down Weather” reminded me of a Santana track with the “fish” being played in the background and the sexy, bluesy guitar part throughout.  Definitely a great lounge track to chill out with.

The peppy and 70’s disco funk fused “I C Colors” was a blast to listen to.  I immediately thought of the “Shaft” theme song or watching “The Streets of San Francisco” and having this track as the soundtrack for a high speed chase.  Akbar’s awesome vocals return on this one for another welcomed treat.  “Flippin’ It On”  has a similar 70’s funk/disco feel with brilliant jazzy flute and sax parts weaving in and out of the funkiness.  This one is quite catchy…watch out!

“Runaway” is a very pretty reggae/pop flavored track which is made even more pretty by the beautiful vocals of Miss Johnna M.  The relaxing bass line and horn ensemble parts create a love scene with our hero and a beautiful vixen walking along the beach in the Caribbean.

“Penthouse Soul” closes the album out with a style previously seen in “Low Down Weather” with the bluesy guitar and jazz flute combining with the keys to make for another fantastic lounge/chill track.  It’s as though the hero has come back to his super-spy apartment and can finally sit down and take a breather while the credits roll over the end of our cinematic story.

“12 Mile High” has so many different styles- lounge bossa, reggae, a bit of smooth jazz, funk, latin, drum and bass, you name it, these guys include it and do it well!  It has a nice mix of instrumental and vocal tracks but seems to have a bit more instrumentals than their last effort “Cinescope.”  Thunderball’s greatest asset is the ability to create a mental picture of their music for the listener so easily, which gets one emotionally involved in their music and wanting more.  That is fine by me, since once you start listening, you won’t want to stop!

Here’s a Soundcloud track of “12 Mile High” for your listening pleasure until you buy the album when it drops on November 9th! 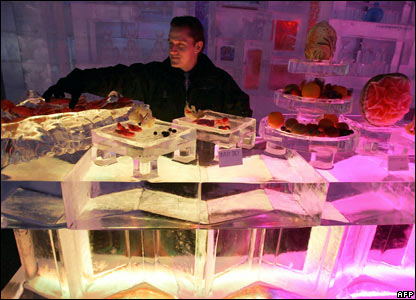 This _literally_ chill bar in Dubai, UAE and is/was the first ice bar in the Middle East upon opening in August of 2007. They keep the temperature at a frigid -6 degrees Celsius (approx 21 degrees Fahrenheit). Upon entering the club, guests are given designer parkas, shoes, and gloves to handle the elements. Drinks (only non-alcoholic, apparently) are served in ice glasses as well.

Seems sort of gimmicky or contrived, but a “cool” place nonetheless.